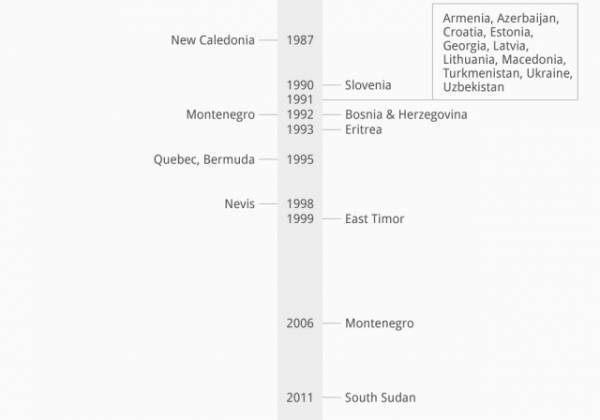 "Should Scotland be an independent country?" 4.3 million Scots answered this question yesterday after months of anticipation, discussion and debate. Scotland's independence referendum certainly stands out - it's rare for a vote like this to take place in a country free from war, political chaos and violence.

South Sudan is the most recent nation to gain its independence after a referendum was passed with almost 99 percent of the vote in 2011. As a chart from statistics portal  Statista revealed based on Pew Research Center information.

Finally Scotland did´t joined the club of 23 other countries that have said yes over the past seven decades.

When 32 of the 32 councils from Scotland have been counted the Yes, leads with 55.3% of the poll, while the No was voted by the 44.7 of the allowed votants, reversing earlier trend that gave the NO votants a slighty difference.

1.
EU Stability and Growth Pact under scrutiny
2.
How Tiktok wants to better protect minors
3.
SPUTNIK V: One of the world's most sought-after vaccines
4.
Former U.S. President Donald Trump hints at candidacy in 2024 election
5.
EU vaccination passport to arrive by summer
6.
Each vaccine has its merits and they all work
7.
Nasal swab tests now approved
8.
Astra-Zeneca may produce less than promised in second quarter
9.
Scholz wants higher taxes for high earners
10.
First special approval for Corona self-tests