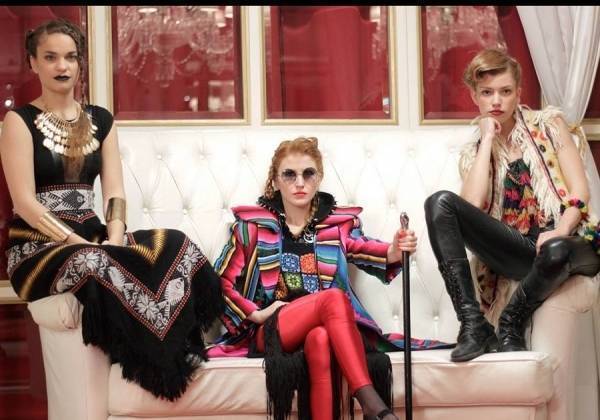 Fémina is a rap folk fusion band from San Martín de los Andes, a little village in South Patagonia, Argentina that is currently on their first European Tour.

Three girls, sisters Wewi Trucco(percussion) and Sofia Trucco(ronroco/guitar) and Clara Miglioli (guitar) are their leaders, composers and vocalists. The band complete line up includes other 4 musicians that couldn´t came in their first incursion to Spain, France, Netherlands and Germany.

Last June they played at Costello Club in downtown Madrid, and then traveled to Barcelona, where they presented their show at the local hip hop and rap scene, gathering and eclectic and enthusiastic public and tying knots with other musical collectives.

Their shows also took place at Bar L´Acajou, on Chatelet quartier in París, and at the Pete The Monkey Festival, held at Saint Aubin, Normandie, France. In Netherlands, Amsterdam witnessed also a show of Fémina at well known trendy restaurant pllek.

They recently arrived to Berlin and will present their music in several bars around the city this week.

Their three clear voices rap and sing over different South American rhythms sometimes funked or downbeated that Wewi wisely plays over a peruvian cajón. Her sister Sofia dances and plays guitar, and Clara staccato vocal rap and melodic voice blends with the others and gives us richfull melodic lines that counterpoint interweaving like a knitted wall of sound.

This European Tour was planned to promote their second CD, Traspasa, released February this year and recorded in 2013.

Femina first CD Deshice de mi was launched in October 2011. Their music can be hear at http://femina.bandcamp.com/ .

Fémina shows at Berlin will take place from Wednesday to Saturday in different bars.