What a week it was. It started out with so much promise for the inhabitants of Munich and then it just went thud. Bastian Schweinsteiger's penalty kick foreshadowed it all so perfectly. He didn't just miss, he hit the post. So tantalizing. As I was watching the final penalty shootout I had a stark realization which made me extremely sad. If I live another 50 years, I'll never see the USA in a World Cup final. There is no chance. No American would accept the penalty shootout as a proper way to end what had been up to that point, a marathon. How can such a beautiful spectacle of flowing form end on such a downer? Let them play till one team scores. After 120 minutes, give them an extra sub and keep playing. In the NHL, I have watched teams play 3 full overtimes, at some point somebody has got to score. Imagine if in basketball they played for a time and then had a free throw shooting competition. Maybe they should have a putt-off in golf. In soccer there is so little scoring, and then there is much, in the deciding stage. Strange. I love soccer, and I get it. But don't expect America to get excited about it anytime soon, and maybe that's a good thing.

Turning to more serious things, yes, there are more serious things than sports, Angela Merkel had a bad week as France elected a new president (most people believe he will want the EU to go a different way economically from Merkel's). North Rhine-Westphalia (NRW), Germany's most populous state, did not give Merkel the numbers she wanted and needed. So Merkel responded in a way that could only make her mentor Helmut Kohl immensely proud, she fired the leader of NRW. This is what is known as Kohl's "mushroom politics". As soon as the head of any potential rival grows up too quickly, like mushrooms, you whack their head off. Environment Minister Norbert Röttgen was the latest casualty, but certainly not the last. And the Pirate Party continues its march.

One of the best things that could have happened to the PIIGS (Portugal, Ireland, Italy, Greece and Spain), actually took place in a small town in Baden-Wurttemberg. There, in a final (fourth) round of negotiations, IG Metall and the industries agreed to a 4.3% increase in wages for the 3.6 million members of the union. Many companies (especially automotive) pay all of their workers the rate increase to dissuade them from joining the union. This was after some warning strikes, which seemed to be gaining in strength and frequency as the weather turned warmer. This was the largest increase in 20 years, and most people believe it was well-earned. The German economy has been the one consistent bright spot in the EU zone. By raising the cost of labour here in Germany, it could very well make the PIIGS more competitive, as their labour becomes cheaper, and therefore they can compete. I think it's about time to ask my boss for some more money. Hey Will!

And finally, it what many here in Germany think is the most important day, many men continued the tradition of getting blasted on Father's Day, which conveniently falls on the same day as Ascension Day. Men took around their beer wagons, known as a Bollerwagen, which are nothing more than vehicles used for transporting beer from place to place. Germany, which still calls its country the Vaterland, seems to encourage this behavior. And being that this year I am a first time father with a very little one, I am looking forward to next year when I can see what all of this is about. 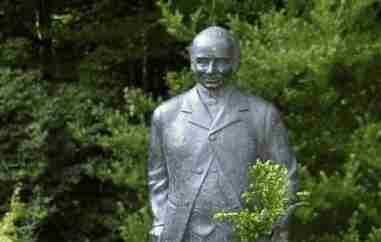