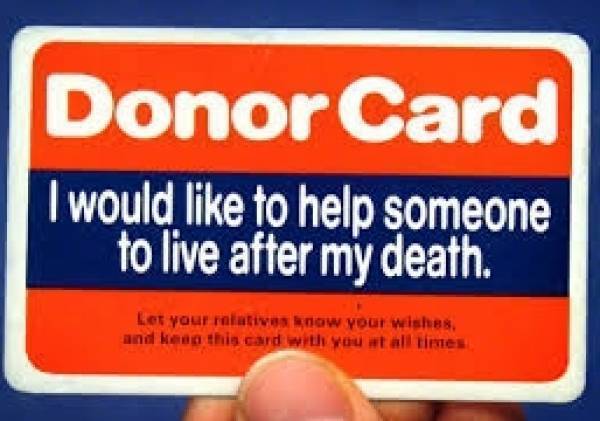 Timothy Potenz asks you whether you think Germans should have to register to become organ donors, or the other way around.

What Is The Situation?
In recent months, the system of organ donation here in Germany has been discussed and, to an extent, reformed. It is hard to argue that these reforms are uncalled for. With 12,000 critically ill patients on the waiting list for organ transplants and three of these people dying every day, the system seems to be in need of significant revitalisation.
The problem with the system, put at its simplest, is that not enough Germans are donating their organs. With only 25% of Germans holding an organ donor card, Germany ranks behind 14 other countries in terms of organ donation levels. Spain's organ donor rate, the highest in the world, is double that of Germany's.
Logically, it would seem, the changes to the system that have so far been pursued have involved a push for greater voluntary donations. A law was brought into effect this year requiring all hospitals to discuss the option of posthumous organ donation with the family members of those recently deceased or soon to pass away.
Furthermore, insurance companies are now required to regularly ask their clients whether or not they will become organ donors. The idea is to try and prevent people from perpetually postponing a decision on which the lives of others depend. The reform is to take full effect by 2017.

What Else Could Be Done?
These reforms, however, have firmly stayed within the framework of an opt-in organ donation system. In the interest of keeping all cards on the table, in this article The Munich Eye encourages you to think about whether or not the German organ donation system could be best improved by remaining within this framework, or by switching to its alternative: the opt-out system.
What are these terms referring to? The opt-in system, which Germany currently uses, automatically classifies all people as non-organ donors until they explicitly ask to become an organ donor. The opt-out system automatically classifies everyone as an organ donor until they ask to be taken off this list.

What Are The Pros?
On the positive side of the opt-out system, it has an almost consistently high success rate. Countries using the opt-out system, of which there are 24 in Europe, tend to have very high levels of organ donation. Our neighbour Austria has a 99.98% consent rate for the system.
This vast increase in organ donation has the knock-on effect of preventing corruption within the organ donation system. Incidences of doctors tampering with waiting lists to get certain patients higher up the list than others who are actually in greater need of an organ, tend to be more common in countries where there is a serious shortage of donated organs.
This year in Germany an investigation was launched into the case of the surgeon identified as Dr. Aiman O. who had unlawfully tampered with waiting lists on 23 occasions. Incidences in the past have also included the unlawful retention of 850 children's organs in Alder Hey Hospital in Liverpool. In 2007, a man in the UK tried to sell his kidney to pay off his gambling debts.
Furthermore, the opt-out system seems to tactfully overcome one of the most sensitive barriers to a high rate of organ donation that exists within the opt-in system. Most people simply don't want to think about their own death. Awareness of one's own mortality is unpleasant at all times and, particularly to young people, seems to be little more than unnecessary. Most people under the age of 65 tend to put off making concrete plans about their death.
It may well be that Germans are not becoming organ donors purely for this reason. Rather than having an actual aversion to the idea of becoming a donor, they simply don't want to have to think about anything to do with their death right now. This argument is given more weight when it is considered that 70% of Germans say they would donate their organs, but only 25% of the population have actually filled out the paperwork and gotten a card.
Ask yourself: do you have a problem with becoming an organ donor? Will you become one tomorrow? If you answered "yes" to the first and "no" to the second, do you think it would do great benefit and little harm for you to exist in a country that uses the opt-out system?

What Are The Cons?
Which brings us to the negative aspects of the opt-out system. Does it actually do harm? The system has been seen as giving the state an effective claim on the organs of all people. It could be interpreted as saying that "the state owns all your organs after your death, but it is willing to give them back to you if you like."
This can possibly be seen as an unlawful invasion of people's rights to control their own body. The opt-out system might therefore change the fundamental limits of what the state can or cannot do without your explicit permission. It has been argued that the state simply does not have the right to claim body parts in the same way that it can claim taxes.
Furthermore, it has been contested that doctors would be less likely to save an ailing patient if they believed that less resources would be spent in allowing that patient to die and using the patients organs to save someone else. One-third of respondents to a 2010 survey by the Federal Centre for Health Education believe that this is actually likely to happen.

What Do You Think?
So, weigh up the options and see what makes sense to you. Should Germany switch over to the opt-out system or should it reform itself from within its current framework? Your opinion counts.