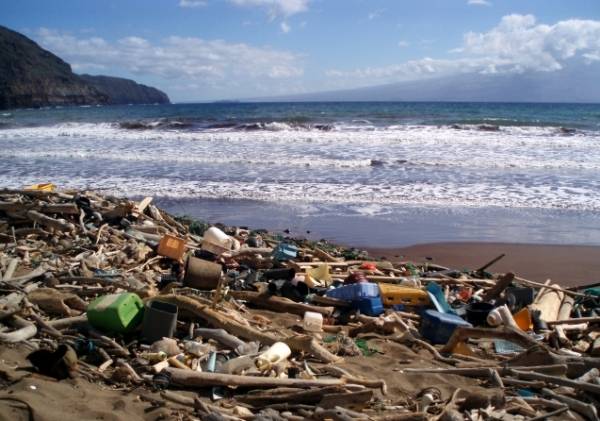 Lots of plastic ends up in the ocean.

Scientists have studied plastic pollution in the oceans since the 1970s, focusing on plastic waste from ships, wrecks, or military operations.

But for Jenna Jambeck, assistant professor at the University of Georgia, and a team of multidisciplinary researchers, an important question remained: How much of the ocean's plastic pollution comes from people on land?

The team looked at data from 192 coastal countries, including the amount of plastic waste generated per person each year in those countries.

Researchers also tallied how much of that plastic waste gets mismanaged.

Mismanaged plastic waste is anything that blows into the ocean or gets swept out in the tide because of littering or inadequate waste management infrastructure, like open landfills.

In their study recently published in Science, the researchers estimated that 8 million metric tons of plastic wound up in the ocean in 2010 alone.

If you distributed all that plastic--and it's just plastic; not any other trash--to every person in New York City, each New Yorker would receive more than a ton of plastic.

"We have a lot of work to do," says Dianna Parker, legislative and communications specialist at the NOAA Marine Debris Program.

Parker didn't collaborate on the study, but she's very familiar with the problem. The NOAA Marine Debris Program collaborates with non-profit organizations, academic scientists, and other partners to clean up shorelines, riverbeds, and marshes across the U.S. and its territories.

Last year, the program's partners cleaned up a total 250,000 pounds of trash, including non-plastic items. That's about 113 metric tons--only a tiny, tiny fraction of the garbage floating throughout the oceans.

Plastic is particularly bad because it's not biodegradable.

On a cleanup in Maine, Parker remembers, she tried to pick up a Styrofoam cup, and it crumbled in her hand. Plastic items never really disappear from the ocean. They just break apart into smaller and smaller pieces.

These plastic pieces pose health risks for animals. Parker has run across several albatross carcasses with plastics in their stomachs.

"We don't know if they died because of that," says Parker, "but it's an indicator of the health of the ocean and where they're fishing for food."

Plastic litter from regular people can sneak into sea turtle diets, too. Flyaway plastic shopping bags and balloons bear an uncanny resemblance to jellyfish. When the sea turtles go in for the meal, they end up swallowing the plastic and harming themselves.

Worryingly, Jambeck's study estimates that if plastic production and population growth trends continue, by 2025 nearly 80 million metric tons will end up in the ocean each year.

"We know that education works," says Parker, citing a recent study in the Marine Pollution Bulletin from researchers at Plymouth University.

Children in the study responded to an educational intervention by saying they were now more concerned about marine litter and taking more actions to prevent the problem.