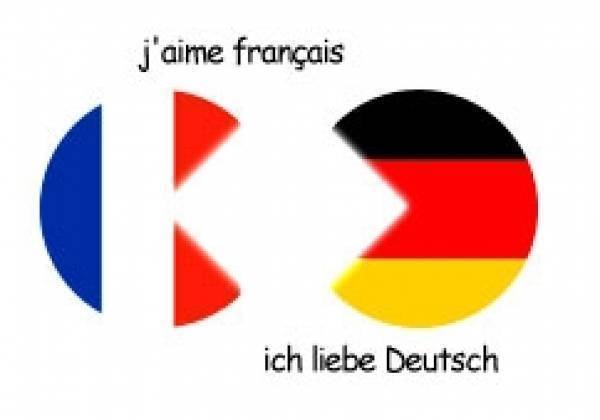 Both German and English belong to the West Germanic branch of the Germanic languages, so their relationship is close. The Anglo-Saxon language (Old English) before the Norman Conquest of 1066 bore close similarities to modern German: Old English vocabulary was concrete even in the expression of abstract ideas, and like modern German it was enamoured of compounding. However, the intrusion of Old and Medieval French drove hundreds of native English words into oblivion, and changed much of the original Germanic character of the vocabulary.

For example, the Old English verb for prediction was "forecwethan" [fore-cwethan], lit. 'to say ahead of time'. The Modern German verb is formed similarly: "voraussagen", lit. 'to state in advance'. Modern English "predict" is a Latinate borrowing, which owes its root to a medieval French verb, which replaced the Old English verb. The Modern French verb for predict is "prédire", and the noun is "prédiction". Now given German "voraussagen", French "prédire/prédiction", and English "predict", it's ironic that the German word bears least resemblance to the English word.

It's not that German has been entirely free of Latinate influence, especially in higher thought. "Politik", "Kultur", "Maschine", "Enzyklopädie", and others are borrowings. However, German has retained more of its original Germanic character than English has.

Vocabulary is only one of two reasons for the strangeness of German to English speakers. The second reason stems from grammatical differences.

Modern English has semantic gender but lacks grammatical gender, which existed in Old English but disappeared. French has two genders (masculine and feminine), but German has three (masculine, feminine, neuter)--the same three that existed in Old English. French speakers have difficulty with many aspects of their gender system, and so do Germans with theirs. Nevertheless, their gender systems remain intact, and English speakers have to learn them. However, there's one additional gender to learn in German. Some guidelines help. For instance, a German noun ending in -er is masculine; e.g. "Schenker". But the meaning of "Schenker" isn't obvious because English borrowed a 15th century French word for the concept, which in modern English is "donor". The modern French word for Schenker is "donneur". So here, the German grammatical aid (a noun ending in -er is masculine) is offset by a semantic disadvantage: The meaning of "Schenker" isn't obvious, unless the speaker uncovers the underlying verb, "schenken", which in English is "donate".

German verbs are problematic too. Depending on conjugational complexities of tense and mood, verbal constituents that are semantically connected might be positionally disconnected, as in "Ich habe das Buch gelesen". In French the constituents are positionally close: "J'ai lu le livre"--just as in English: "I've read the book". In Old English, word order was flexible, but one of the most conspicuous changes in the history of English was the gradual loss of lexical flexibility.

Do any English speakers have good things to say about German? They do! They say "Deutsch macht mir viel Spass", especially in its vocabulary. It really is fun to dissect a German word into its often whimsical constituents and to see how the parts combine to express a single idea. "Fernglas" is a lot more fun to learn than "binoculars". And it's surprising to realise that a reference book, such as an encyclopaedia, is a work that appears to pursue an idea and strike it, as if to bring it into subjection to the mind (a "Nachschlagewerk"). In German the spinal column is called "Wirbelsäule", lit. whirling column. ("Wirbel" also occurs in "Wirbelsturm", tornado, cyclone.) The German term graphically captures this anatomy, and in addition links it to a meteorological concept. In contrast, both of the words in English "spinal column" were borrowed from medieval French, and the words replaced graphically vivid native words. Old English had several words for spine and spinal column. One of the latter was "hrycgmearhlith" [hrycg-mearh-lith], lit. ridge-marrow joint--another lexical graphic, if I may put it that way.

German is attractive to the intellect, and pretty to curious minds.