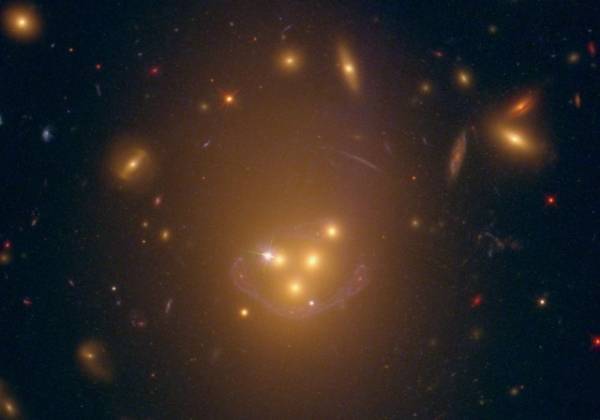 Dark matter has been mysterious ever since its discovery.

According to Dr Holger Israel, a cosmologist at Durham University in England, "we know that something is there that can't be any of the particles we know about. But we don't have a good idea yet what it is."

Yet that something makes up 85% of the mass in the known universe.

The mystery arises, at least in part, because dark matter is extremely elusive.

It's invisible because it does not interact with light (hence its sinister-sounding name), and it hardly interacts with anything at all, including itself.

It only attracts objects through gravity. However, its effects are huge.

Dark matter coagulates inside and around galaxies, where "its sheer mass determines how galaxy clusters and galaxies formed and continue to evolve, setting the conditions in which the 'ordinary' matter forms stars and planets", says Dr Israel.

Dr. Richard Massey of Durham along with Dr. Israel added a new piece to this puzzle with their research published on Monthly Notices of the Royal Astronomical Society.

They found that dark matter might be more "sociable" than we thought, and weakly interacts with itself.

Using the Hubble Space Telescope and the European Southern Observatory's Very Large Telescope, they studied a cluster of galaxies about a billion light years away from us (which is rather close-by as galaxy clusters go).

There, four galaxies are slowly crashing into each other, perfectly aligned---from Earth's point of view---with another galaxy far behind them.

Thanks to this alignment, the team could exploit an effect called gravitational lensing: a very massive object---like a galaxy with its dark matter---bends and distorts light around it through gravity.

For example, the blue halo around the four colliding galaxies in the picture is actually the distorted image of the one far behind them.

By measuring the distortion, astrophysicists can tell where objects are and how big they are, even if they are invisible, like dark matter clumps.

Normally, gravity makes each clump "stick" to a galaxy.

In one of these four, however, the team found that the dark matter was lagging behind, as if slowed down by some drag.

As Dr Israel explains, "we interpret the displacement as being caused by friction of some sorts between the Dark Matter surrounding the galaxies. If Dark Matter interacted with the ordinary matter via known interactions, it would produce light as well. Hence, it wouldn't be dark."

This "friction", then, most probably originates from dark matter particles interacting with each other.

If confirmed, this new force within dark matter would be just too weak to see in undisturbed galaxies, which is why it was never reported before.

"We already know that Dark Matter self-interactions, if they exist, need to be very subtle---says Dr Israel---only in extreme circumstances like galaxy collisions will there be a measurable effect at all."

We are getting closer in our hunt for dark matter.

This research set a minimum for how intense the forces inside it can be, while a recent publication by the same Durham team found a maximum, and the Large Hadron Collider is investigating what its constitutive particles could be.

It seems like this "deep dark secret" won't be kept under wraps for too long!