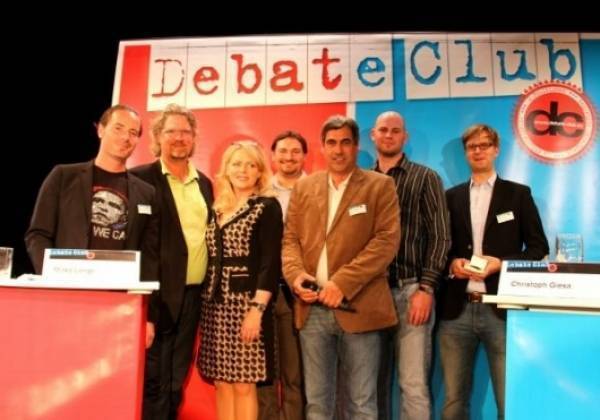 I love Fridays. I really do. Not for the reasons you might assume. It's media-related - my reason. I really enjoy the Süddeutsche Zeitung (SZ) Magazin that comes in Friday's edition of the paper. It's both cleverly written and aesthetically pleasing.

Each week, I quickly flip through the pages to look at the beautiful photos, and then I go back and read nearly every page. Carefully. A bit like I read the New Yorker magazine when I was a teenager. Later I lived in Oak Park (a suburb of Chicago), and the New Yorker would arrive (I think it came on Friday, as well), and I'd perform a comfortable ritual.

Brew a pot of coffee, leaf through the pages and then during the week I'd slowly pore over each article. I didn't have much money then. Had just finished my degree and was on a budget. Who am I kidding? I didn't have enough to even have a budget. I was poor and in debt and had few, if any, luxuries.

But the New Yorker I could afford. To be honest, it was the neighbour's, so I didn't have to afford it. I simply had to read as much of it as I could before she got home from work on Friday. Then sometime during the week, she'd drop it on my doorstep.

Why am I telling you all of this?

Well, I don't read the New Yorker as religiously as I used to. The SZ Magazin, on the other hand, gets my attention these days. It's my new passion. Same ritual, except now it's a pot of tea, and the same once-through quickly and then more carefully over the weekend.

What do I turn to first in the SZ Magazin? 'Die Gewissensfrage' of course. It's often the high point of the whole issue, and I talk to my friends and colleagues about it during the week.

That's what 'Die Gewissensfrage' means. Every week, Dr. Dr. Rainer Erlinger, who's so smart he gets two doctors in front of his name, takes an ethical question from a reader and answers it to the best of his ability.

However, his answer is rarely what fascinates me. It's the conversation that The Ethical Question spurs in my daily life. A few of my favourites have been: If you see someone hitting a child in public, do you intervene? Or: When your mother-in-law gives you a tacky gift, are you obligated to wear it even once? I think that's how it was phrased. I can't remember. If I think the question can be spiced up at all, I don't hesitate to do so.

The one from this week's issue is priceless: Again and again, people who I barely know (colleagues, neighbours, etc.) send me friend requests on Facebook. Because I barely know them, I'm not interested in such contact with them. How should I react?

That's not bad for a question is it? It gets right to the question of what a friend is. What does friend mean? Americans play fast and loose with the term "friend", but even we know that there's a difference between acquaintances and close friends.

Earlier in the week, CNN International and Roland Berger Strategy Consultants sponsored a Debate Club at the TamS Theater in Schwabing in which they talked about social media and democracy. It was intriguing, but not for the reasons you might think.

The question being debated was something like, "Facebook, Twitter and Co.: Is social media a blessing or a curse for democracy?" What a question, eh? Sort of difficult to cover in an evening's discussion, but they did admirably. There were a few celebrities there, but unless you pay close attention to the German media, you might not know who they were.

Eva Herman, who's notorious in Germany for having been fired from ARD for inflammatory comments she made in a book she wrote years ago, was one of the debaters, as was John Friedmann, who some know for having played Stefan in the Pro7 comedy show Erkan und Stefan.

There was a politician and programmer from the Green Party called Thomas Pfeiffer, as well as Christoph Giesa, who's an author and former FDP politician - both quite knowledgeable about the topic, which is all you can hope for at such an event.

It was supposed to be a traditional Oxford-style debate, but it was more entertainment than intellectual discussion. The panelists debating the issues were well-versed in their topic; Ms. Herman has even written a book recently called Das Medienkartell that apparently questions the nature of contemporary media. Valentin Tomaschek rounded out the opposing team and made up for his lack of polish with careful and deliberate thought.

The moderator for the evening, Diethelm Straube, kept the event running along briskly, and on more than one occasion became part of the story with his witty and knowing asides. The celebrity side won the debate, partially due to the above-average skills of Mirko Lange's rhetoric. If you want to see his take on the event, check out: http://blog.talkabout.de/. It's in German and worth a read.

Back to my question: what is a friend?

After the event at the TamS Theater, I was speaking to a professor of communications, whose name I didn't get, and he said something I found intriguing. They've done studies about close friendships and social media. It turns out that how many Facebook friends you have has little, if anything, to do with your real friends.

Most people have a handful of true friends, with whom they share the most important events of their lives. It's possible I have too many friends on Facebook, but my closest friends know who they are and social media doesn't have much, if anything, to do with that.

In my opinion, social media is not a fad. It could be considered a frontier like the Wild West, as some of the debaters would like us to believe, but no one's holding a gun to your head to join any of the websites. If you choose to ride on the range, then you're responsible for protecting your private data. Presumably, we are all adults and should take a bit of responsibility for our actions.