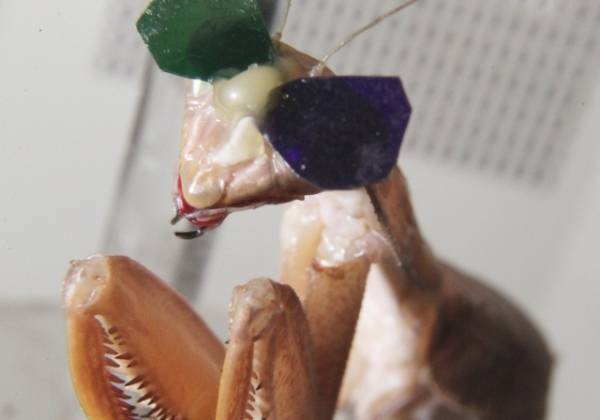 Hold a pencil in front of you and look at it with one or the other eye closed: it appears to shift a little.

That's the key to three-dimensional vision (scientifically called stereopsis): each eye has a slightly different angle of view, then our brains "figure out which bit of the left eye's image corresponds to the same point in space as a given bit of the right eye's image," explains Jenny Read, Professor of Vision Science at the University of Newcastle.

It might seem mundane, but it's a remarkable feat. So much so that humans and other vertebrates devote quite some brain space to that, where complicated processing algorithms work their magic to bestow upon us the marvel of depth perception.

Dr. Read's team looked for a somewhat less intricate process to obtain similar result in a very different organism: the praying mantis. According to Dr. Vivek Natyananda, the principal author of the study, "given their relatively smaller nervous systems, insects might have stereo mechanisms that are easier to model and perhaps implement into algorithms."

Deciphering the processing algorithm of insects could have plenty of applications. Self-driving cars, delivery drones and all sorts of autonomous robots could use it to evaluate distances, identify and avoid obstacles, recognize object shapes and sizes faster and more accurately. Computers can already do that to a good extent: the Xbox, for example, uses the Kinect technology to rather accurately figure out scenes and movements in 3D. But it needs a heavy, power-thirsty state-of-the-art gaming console to complete the task, whereas, as Dr. Read says, "mantises perform highly effective 3D vision on a system weighing a couple of grams and running off a couple of crickets per week."

To conduct their experiments the scientists built an insect-size, but full-fledged, 3D movie theater. They fitted their audience (a single mantis) with tiny "anaglyph" glasses, those old-school red and green lenses (only these were green and blue, because mantises don't see red very well). The feature presentation was the computer-generated shadow of a bug spiraling closer and closer to the mantis. Not exactly riveting for us, but it was very compelling for the insect's predator instincts: when the "prey" appeared to be close enough, the mantis struck to grab it.

So mantises do indeed see in three dimensions. Besides, they appear to process images differently from us.

Remember how the mantis was given "old-school" glasses for the experiment? It's because the modern type- that work for human eyes in movie theaters around the globe-didn't do the trick for the mantis. "The lenses didn't prevent the eyes from seeing images intended for the opposite eyes," Dr. Nityananda says, "thus, the eyes weren't receiving only the appropriate versions of the images but the 'wrong' versions as well."

Further studies are needed before this research gets applied: "we are still in the very early stages of figuring out the algorithms used by mantises," says Dr. Nityananda, "so we don't have a clear pathway to the applications."

So we'll probably have to wait a few years for highly efficient, lightweight robots that use "mantis vision" to look at things in three dimensions.

One thing is sure, though: they will leave us bug-eyed!