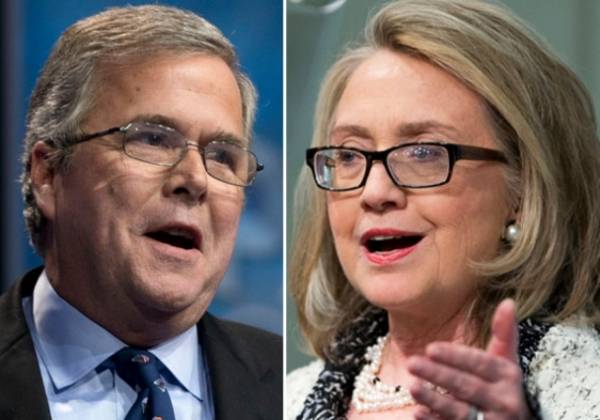 As the US elections are gearing up again for the coming year, both the Democratic and Republican caucuses are in the final days of deciding on which candidate to throw their weight and support behind. Perhaps for lack of better candidates, the names at the top of the polls are extremely familiar this time around - both a Clinton and several Bush's have resided in the White House previously, with varying perceived degrees of success. Both have been hailed as successful and terrible by their and the opposing party, which is not surprising in a two party system. Both candidates maintain a strong tradition in politics and have experience in both national and international politics to varying degrees. Both also maintain strong connections to the old political establishments in the US - their list of political donors read somewhat similar, which reflects the American tradition of betting on both sides of the race in order to insure a "win". Supporting a political candidate in the United States can be likened to an investment - promises will be made, separately to the public mandate, which will then be fulfilled upon election. Ideally these promises coincide with the needs of the public, who may not always be aware of the finer turns of the economy and international issues.

What did come as a surprise this time around was the sudden announcement of Bernard "Bernie" Sanders to run as an independent. The self-described socialist has been surprising many since his start in politics - he beat the six-term Democratic incumbent for Mayor in Burlington, Vermont. After competing and winning three more terms against both major parties, where the final election held him competing against candidate endorsed by both major parties, Sanders aimed for the newly vacated seat in Congress. Again he ran as an independent, separately from both major parties, which is a difficult path to take, and won. He then continued his unusual success story in 2005 with a move to the US Senate.
All along Sanders found support among the long-neglected American Unions, and many voters disillusioned by the mainstream politics of the Democrats and Republicans. Sanders has independently voted on many issues, but follows a generally socialist direction; supporting universal healthcare, marriage equality, media reform to combat the incumbent monopolies dominating mainstream media discourse in the United States as well as general transparency in business and politics.

During this election he seeks to differentiate himself from Hillary Clinton by taking on Wall Street and "Big Banks" - as she enjoys sponsorship by corporations such as Citigroup, Goldman-Sachs, JP Morgan Chase & Co, Fox and Merryl Lynch. With a platform that echoes many of the demands made by the Occupy Wallstreet movement, which has dissipated since the spectacular show of support in 2011 due to a number of factors including lack of media and political support, Sanders hopes to rekindle the flame of popular support and break away from the slowly stagnating American political schema.

Sanders announced his candidacy on the 30th of April 2015 and managed to secure a total of $1.5 million overnight - with a total of 35,000 individual donors. This not only constitutes a new fund-gathering record, but also managed to gain a lot of media attention in it's own right. This of course does not even begin to compare to the multi-billion dollar campaigns waged by the other candidates, but Sanders has stated that "It is vulgar to me that we're having a war of billionaires [for the presidency]" and seeks to raise support in a less wasteful campaign. Popular support currently seems to be surging, perhaps an indicator for the fatigue of American voters regarding their ever-distant political elite.

Traditionally, third party candidates, as candidates are called who do not enjoy the support of either the Democratic or Republican Party, tend to split the votes of the voter base of either of the parties, depending on the side of the political spectrum from they emerge. The most recent example would be the emergence of the Tea Party, which split the republican voters and arguably aided Obama's reelection in 2012. The closest a third party candidate has come to actually winning the presidential election was in 1912 when Theodore Roosevelt, under the banner of the "Bull-Moose Party", received 27% of the popular vote and 88 electoral (state) votes - losing to Woodrow Wilson, who managed to achieve 42% of the popular vote and 435 electoral votes.

Whether this election will be different, or at least the other candidates will be forced to reevaluate their campaign platforms to follow a growing public support for more socially oriented policies, will be revealed in time. In any case this will be a historic election - the USA will likely either have its first female, third party or dynastic president. A fitting candidacy board following the first black president in US history.