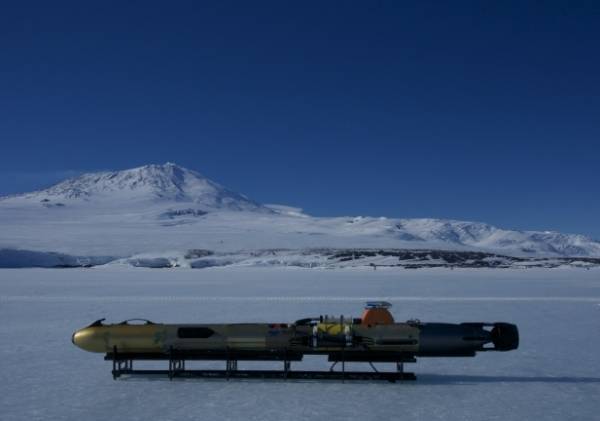 The drone was the eighth member of an international research expedition to Antarctica last October. On its maiden voyage, it mapped hundreds of meters of ice algae with an enviable ease.

Ice algae play an important role in the ecosystem at both poles. Every year, the brownish phytoplanktons beneath the sea ice herald the spring. As sunlight returns, the algae populations grow, nourishing each subsequent link in the food chain.

"There are a whole lot of organisms that are dependent on the spring growth. It only occurs in the sea ice," says Ian Hawes, professor at the University of Canterbury and primary investigator.

Normally, researchers would core for insights about ice algae. Coring is difficult, especially in Antarctica where ice gets 2 meters thick. Two people drill down 1.5 meters with a two-stroke drill. They do the rest by hand. It's grueling work, and while the resulting ice core sample can contain more than 30 algae species, researchers can only cover so much ground.

"With this drone, you can measure kilometers with a high resolution, so you can get a better idea of the distribution of ice algae across the ice," says Lars Chresten Lund-Hansen, associate professor at Aarhus University and part of the research team.

The drone could easily map thousands of kilometers, though researchers stayed cautious for this first test drive, tethering it to a 1-kilometer rope.

Measuring light and sea ice roughness, the drone helped give an idea of where ice algae sit. Ice algae absorb light at specific wavelengths, so knowing how much light comes in at those wavelengths is important. Bumpier terrain, with more surface area for algae to grow on, gives another clue.

Researchers stayed busy on the 10-day expedition. Divided into a coring group and a drone group, they maximized the time with 12- to 14-hour days. Hawes often joined the coring team, helping calculate the algorithms the drone needed to make its large-scale measurements.

"You could be on your 50th hole, and all you have to do is look up and realize where you are, and it's such a beautiful landscape," says Hawes.

The primary aim is to understand the ecosystem, but ice algae bear an indirect link to climate change effects.

"In the last 20 to 30 years we've seen less ice coverage in Antarctica, which means less and less ice algae," says Lund-Hansen. "And what will that mean?"

The team hopes to find out by exploring Greenland's ice algae with the drone next--hopefully equipping it with a tool to measure oxygen flux, which would indicate the sea ice community's productivity.