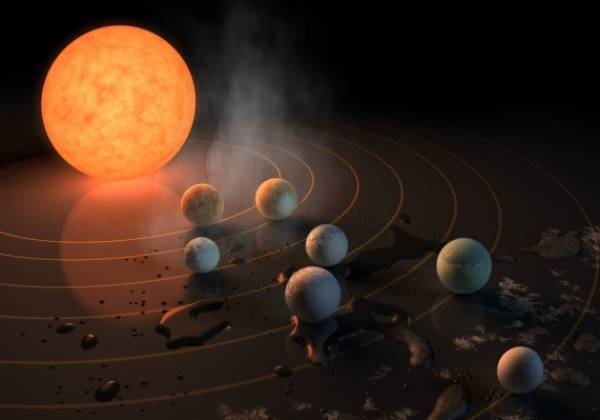 Astronomers found seven approximately Earth-sized, rocky planets about 40 light years (235 trillion miles) from us. They are named after TRAPPIST1, the small, dim, relatively cold star they orbit, plus a letter (b through h). The announcement came during a much-hyped press conference from NASA headquarters on 22 February.

The more a planet seems similar to Earth, the more it captivates scientists (and the public), because it might have the right conditions for life to blossom.

Now they found seven in one go---almost as many as total planets in the solar system. Three of them are even in the habitable zone: the right distance from the star to have liquid water on their surface.

The scientists analyzed the star as the planets passed in front of it, blocking part of the light. From the dips in luminosity, they teased out the planets' size and motion.

If we could travel to one of TRAPPIST planets (which won't happen anytime soon), we could expect amazing skies: they are so close to each other to appear larger than the Moon in our sky. Plus, due to their tight orbits, their star's gravity forces them to have a perpetual day and a perpetual night side, like Proxima b.

According to the scientists, the planets should have formed farther outside, then moved closer to the star. The outskirts of stellar systems are typically rich in ice, which bodes well for these planets having water; indeed one of them seems to have the right density to be water-rich.

It's too early to say whether they harbor life, though, or whether they are even capable of doing so. A number of factors play in that, chiefly the nature of their atmospheres. Observations with the Hubble Space Telescope are already underway, and the TRAPPIST1 system will top the targets list of the upcoming James Webb telescope.

TRAPPIST1 is but the first star of its kind we study, so we can expect to find many interesting planets as we search new stars.

The sky is full of potential Earths waiting to be found!