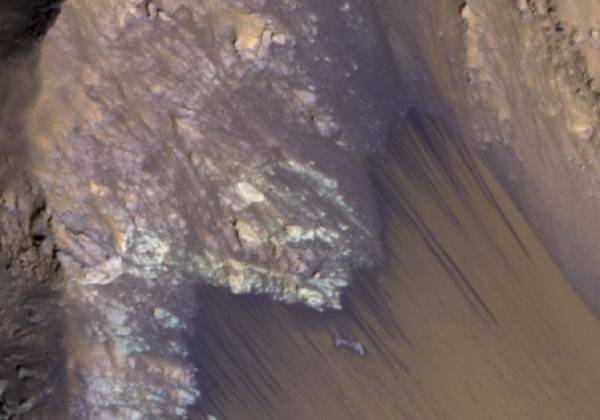 The evidence comes from long, dark streaks---first seen on images from the Mars Reconnaissance Orbiter---that stretch down some mountains and crater walls on the planet. Because they grow bigger and darker during Martian summer, then recede in winter, these lines have been dubbed "Recurrent Slope Lineae" (or RSL).

Through spectroscopy (a technique that analyzes light bouncing off a substance to determine its chemical composition), the scientists found that the streaks contained mostly some salts called perchlorates.

But it turns out that they also contain water molecules. So the RSL are extremely concentrated brine (solution of salt) seeping on the Martian dust that freeze or dry up in winter and ooze in summer.

Each RSL contains very little water, so the flow is more similar to mud than to a stream.

The biggest question is where the water comes from. The most likely scenario is that, perchlorates absorb humidity from the air, but there is also speculation about subterranean water leaking out, possibly through a network of aquifers (underground layer of water bearing rock).

Furthermore, it's completely unknown whether this water harbors any life (perchlorates are extremely toxic). Scientists, however, are very cautious about looking for signs of life on-site: any object we bring there might contaminate the area with bacteria from Earth.

This discovery though, answers the long-standing question about water on Mars.

Now that scientists know what to look for, it provides a starting point to search for more water on its surface, under it and on other planets thus paving the way for further human exploration.