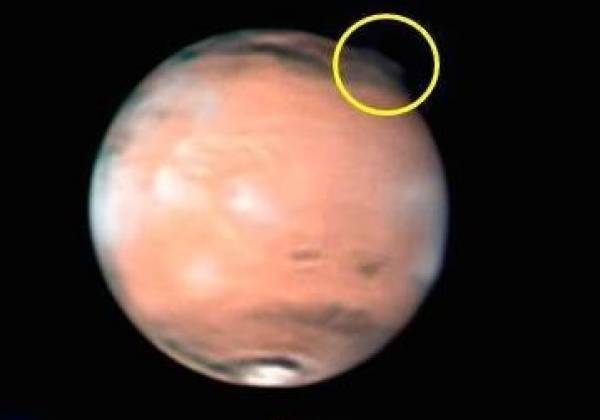 Have you ever looked at the clouds and spotted something really odd?

British stargazer Damian Peach has a story that will definitely top that: on 12 March 2012 he spotted a strange cloud---on Mars.

Later, a team of researchers, led by Prof. Agustin Sanchez-Lavega of the Universidad del País Vasco in Spain, confirmed that what he saw was real.

Their pictures show a gray cloud, or "plume", sticking out of the southern part of the red disk of Mars.

The plume was quite conspicuous: its estimated altitude was a whopping 200 kilometers, and its surface extended over several hundred thousand square kilometers.

Still, it was very faint and could be seen only against the darkness of space. Because all probes and spacecrafts orbiting the planet stare right down to the surface, they all had the wrong angle to observe the plume.

Moreover, the plume formed only over a specific patch of land and exclusively when the Sun was rising over it.

So, to see it, astronomers needed Mars to face Earth exactly in the right way, exactly at the right time. 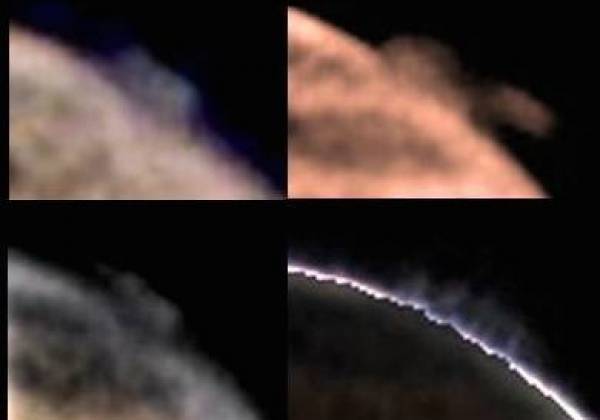 If at all this event occurred, it would be for about an hour a day. However, the phenomenon returned, day after day, for a total of 20 sightings between March and April 2012.

And yet nobody knew what the plume was!

Searching for an answer, the scientists browsed thousands of pictures from amateur astronomers and the Hubble Space Telescope and found a single similar event, spotted by Hubble in 1997.

It had the same shape, appeared in the same general area, and at same time (sunrise) as the 2012 plume. And just like this one, it was mysterious.

Sanchez-Lavega and his colleagues published a Letter in the journal -Nature to share their hypotheses and results, hoping to find help.

First, they thought the plume could be dust swept up by the wind. But dust would reflect light differently.

An alternative explanation was that, since Mars experiences an extreme temperature change (over 150°C) at sunrise, the plume was created as a result of cloud of carbon dioxide-ice or water-ice formation.

However, everything we know about the Martian atmosphere tells us that clouds reach, at most, half the estimated altitude of the plume.

Finally, a possible cause is auroral activity, like our Northern and Southern Lights. Auroras appear when particles blasted from the Sun interact with a strong magnetic field on a planet, as it happens near the poles on Earth, as well as in some regions of Mars.

Despite the fact that the plume formed in one of these regions, it would be an incredibly intense aurora---3000 times more than normal, according to Sanchez-Lavega.

Such exceptional brightness would require an exceptional solar activity, of which there was no trace in those days.

Therefore, finding the cause behind the mysterious plume may profoundly change our understanding of Mars' atmosphere. Maybe we will know more through the European ExoMars probe, which launches in 2016.

Or maybe Martians made contact with us using smoke signals!