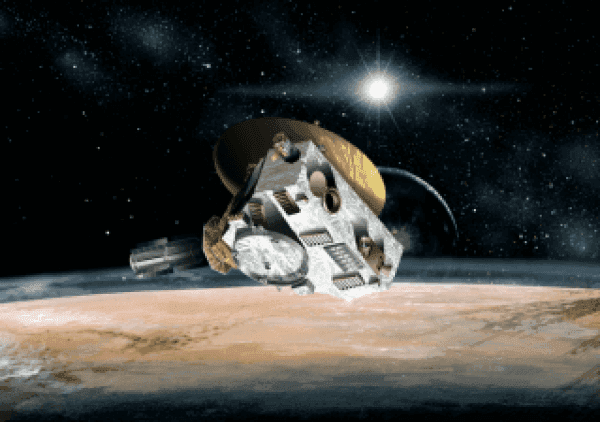 We know very little about Pluto.

Mostly because it's very small (about a third of the Moon) and because its unusual orbit confines it to the outskirts of our solar system.

It's actually so small and far away that even the best picture we have from the mighty Hubble telescope is just a reddish blur.

So scientists demoted Pluto to "dwarf planet" and dubbed it part of the Kuiper Belt, a band of rocky and icy debris orbiting at the edge of our solar system since its birth. But we're about to learn a whole lot more.

New Horizons is the first probe ever to approach Pluto, after traveling almost 5 billion kilometers (that's billions with a B) in the 9 years since NASA launched it. New Horizons spent most of this time in a hibernation state, designed to save power and prevent the instruments from wearing out.

Last December it woke from the last of these "naps" to prepare for February 2015, when observations will start. The big day is July 14th, when the probe will pass a mere 10 thousand kilometers from Pluto and its largest moon, Charon, to get a close-up look at their peculiar dance.

Charon and Pluto, in fact, form a binary system: the moon doesn't orbit the planet as much as they two orbit each other, both revolving around a point between them.

During the travel, the on-board instruments already gave us the first image where Pluto and Charon are visible as distinct objects, and some spectacular pictures of volcanic eruptions on Io (one of Jupiter's moons).

According to Prof. Lisa Kaltenegger, director of the Institute for Pale Blue Dots, a Cornell-based group researching extrasolar planets, the greatest advancement New Horizons will provide is "a first fascinating view and a first understanding of Pluto and Charon's atmosphere and high resolution surface images".

In fact, we will be able to tell whether Pluto has any rings, exactly how many moons it has (now we know of five, but when the probe launched we thought they were three), understand what materials make up the planet surface, see any geological activity like geysers or volcanoes and craters from past impacts. There is also the possibility that we might even detect traces of water from a subterranean ocean!

After Pluto, New Horizons continues to the Kuiper Belt. Scientists think Belt objects might be very similar to Pluto, mostly made of rock and ice---nothing like rocky planets like Earth and Mars, or gas giants like Jupiter or Neptune---and they are thrilled to get the first-ever close look to them, as well as Pluto: "Are they similar, different? Either is exciting", says Kaltenegger. New Horizons will visit and study one of these small planets, two if fuel allows, between 2016 and 2020.

The Kuiper Belt makes up a large fraction of our solar system, but its study has only just started (we don't even know if we should count them in billions or trillions).

Research indicates it could be a pristine relic of our solar system's early times, with a lot to teach about its birth.

The mission will advance the search for habitable planets outside of the solar system as well: according to Kaltenegger, we could understand "how such planets could have very different atmospheres" and also "how we could build a habitable planet".

So, after ESA's Rosetta mission landed on a comet in 2014, New Horizon's journey to Pluto and the Kuiper Belt will usher in more exciting years of space exploration.

To infinity and beyond!