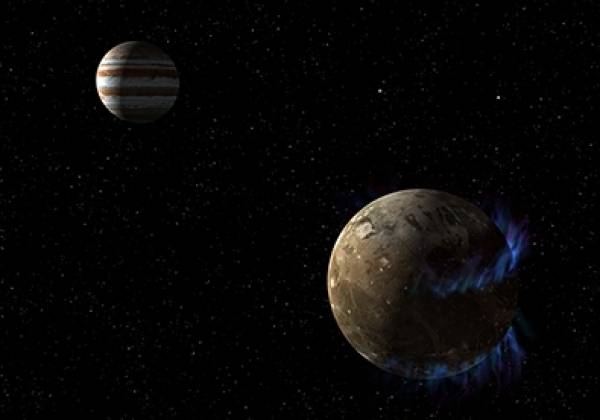 An international group of astronomers found an immense ocean buried under the icy surface of Ganymede, the largest of Jupiter's moons.

In a recent paper reporting the discovery, scientists estimated the ocean to be an amazing 100 km deep (10 times more than Earth's deepest abyss) and to contain more water than there is on Earth.

Even more amazingly, the scientists found it using the Hubble Space Telescope to look inside Ganymede.

Of course, not directly, instead, they brilliantly exploited the satellite's auroras.

Auroras are what we call Northern (or Southern) lights on Earth, but appear elsewhere too: all you need is a magnetic field and an atmosphere.

When charged particles blasted from the sun, reach a planet or satellite with a magnetic field (like Earth, Jupiter, or Ganymede, among others), the magnetic force shepherds them to the poles.

There, they bump into molecules of the atmosphere and make them glow spectacularly.

Ganymede has all the ingredients: a magnetic field and a very thin atmosphere.

Moreover, Ganymede's field (as Earth's) always points in the same direction, like a spinning top, whereas Jupiter's field rotates with the planet, like a lighthouse.

Thus, it points sometimes towards the satellite, and sometimes away from it.

Jupiter's field is much stronger than Ganymede's, and this change in its powerful influence makes the satellite's auroras wiggle.

Observing the amplitude of the wiggle, the scientists saw it was less than they expected: something was counteracting the influence of Jupiter.

They calculated that the cause had to be a layer of some conductive material, relatively close to the surface of Ganymede, like a salty, liquid ocean.

The idea of water on Ganymede was not completely new: very detailed measurements of gravitational fields "yield a wealth of information about the interior of a solar system object", says Professor Darrel Strobel of Johns Hopkins University, coauthor of the study.

For example, we know that Ganymede is layered with a metallic core and water or ice on the outside.

According to Professor Francis Nimmo of the University of California at Santa Cruz, who was not part of this study, "astronomers were quite confident that liquid water was there, but there were some lingering doubts, which the current study has helped to remove."

We don't know whether Ganymede's ocean harbors life as we know it, or if it ever has.

Though necessary, water alone is not enough, "you also need an energy source and a source of nutrients," says Nimmo.

If there is life, it usually leaves traces of biomolecules in the atmosphere, but "detecting complex molecules by remote sensing would be exceedingly difficult. The preferred way is direct measurements by low-flying spacecrafts," says Strobel.

ESA and NASA are planning the missions JUICE and Clipper to study liquid water on Ganymede and all Jupiter's icy moons, also looking for traces of life in their atmosphere.

Most excitingly, astronomers are discussing how to use auroras to find water inside Exoplanets (planets out of our solar system).

"The key requirements are that the planet and the satellite have magnetic fields, with the parent planet impacting the satellite atmosphere to create well-defined auroral ovals," Strobel says.