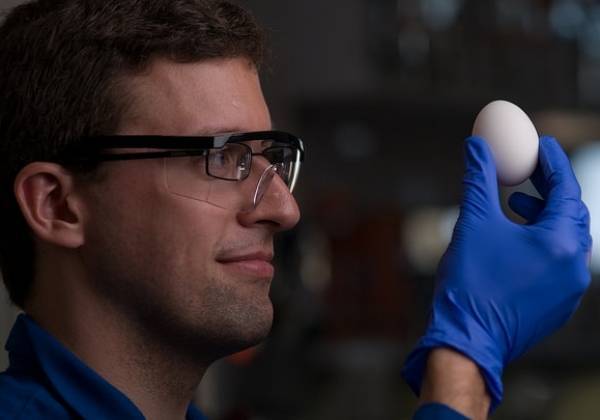 When scientists unboiled an egg in the lab, they were not trying to start a cooking trend.

They were after better ways to refold proteins.

Proteins are bulky molecules. The way they are shaped defines how they work.

When proteins get misfolded, they become a useless, sticky mess of gel.

"It's like tangled fishing line. It's very hard to tease apart," says Gregory Weiss, professor at the University of California, Irvine and co-author of the study published in the journal ChemBioChem.

But there's a faster, cheaper way, Weiss and his team discovered in collaboration with Professor Colin Raston of Flinders University in Australia and researchers from The University of Western Australia.

Everything started with a conversation between Weiss and Raston, who had done interesting experiments with an emerging technology called a vortex fluidic device (VFD).

"I was in Colin's office, and he's telling me about this wild device that allowed him to do stuff that I knew was really challenging,'" says Weiss. "My ears started perking up immediately."

The VFD's motor rotates a glass tube rapidly, swirling its contents at a specific angle and speed. At those high speeds, the solution forms thin microfluidic films, which apply mechanical forces to whatever's inside. Scientists can adjust the angle, speed, and flow of liquid through the device to optimize results.

Everything going on inside the glass tube is mechanical, though. That's important.

"Because you are putting a form of mechanical energy into the thin film, you can get things to go without heating them," Raston says.

Raston had recently used the VFD to peel away individual layers of graphene from graphite, another industrial process that's typically costly. Weiss realized the VFD could be useful for his protein research.

Raston sent a graduate student and a customized VFD to Weiss's lab. The team tried out several proteins before landing on the idea of boiled egg whites.

It took a few tries, but after adjusting parameters, the scientists reverted the egg white proteins back to their original, pre-boiled state.
Amazingly, it only took minutes; not days, like the current process.

"I was really thrilled," says Weiss. "Almost immediately it was a high-five moment because if it works for these proteins, it would work for others."

For Weiss, their success gives an exciting illustration of thermodynamics. Unless a protein changes at the chemical level, you can recover its shape.

"The VFD introduces mechanical energy, stretches the proteins, and snaps them back into place like rubber bands," Weiss explains.

The next step is adapting the VFD approach for industrial settings. See, bacteria naturally mass-produce jumbled proteins. With the VFD, companies could harvest proteins from bacteria and refold them in minutes. It would be faster, cheaper, and greener. And it could eventually lead to cheaper drugs for patients.

For Raston, the study marks another step towards understanding thin film microfluidic dynamics and its uses.

"It's very exciting to have the ability to unfold proteins," says Raston. "It adds further to the remarkable applications that we are discovering with the VFD."