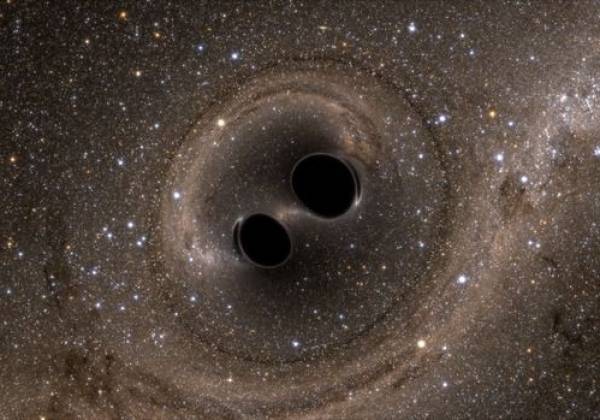 "Ladies and gentlemen, we have detected gravitational waves. We did it!" This is the historical announcement with which Prof. David Reitze, executive director of LIGO (Laser Interferometry Gravitational-wave Observatory, with locations in Hanford, WA and Livingston, LA) kicked off last Thursday's press conference.

The discovery had been rumored about for months, so it wasn't entirely surprising. Moreover, it was confidently predicted in Einstein's General Relativity. According to this theory, when masses accelerate, they create ripples in space-time: the gravitational waves. These propagate in all directions, stretching and squeezing the fabric of space itself in their wake.

The waves observed at LIGO, for example, came from two black holes, each about 30 times the mass of the Sun, that slammed into each other at about half the speed of light, some 1.2 billion light years away from us. This is a mind-boggling event: "The power output was 50 times greater than all of the power put out by all stars in the universe put together," said Prof. Kip Thorne of Caltech.

As they crashed, the black holes screamed out a gravitational wave of increasing pitch and intensity.  LIGO picked it up, but it wasn't easy because, despite the immense forces that unleashed it, the wave's effect was tiny. So tiny that only an instrument as precise as LIGO could detect it. And it's very precise: as Reitze explained, it could in principle measure "the distance between the Sun and the nearest star to a level of about the width of a human hair."

To achieve that, LIGO uses lasers. Splitting a laser beam in two sibling branches, and sending each through a long carefully constructed path, it's possible to have them join again with their light waves interfering exactly peak with trough, thus perfectly canceling each other. If gravitational waves were to hit the device, they would stretch one path and shrink the other, periodically, messing with the interference.

But with great sensitivity comes great disturbance: anything from micro-earthquakes to cars registers on the detector. To eliminate all these factors, researchers uset up two twin observatories at opposite ends of the continent. Only signals detected almost simultaneously by both could come from outer space and be gravitational waves.

Indeed, in September 2015, just as LIGO was firing up after its latest upgrade, a signal appeared in both places. Not only that, it fit perfectly with theoretical calculations! So, as Dr. Gabriela Gonzalez of Louisiana State University said, "we know not only that we detected gravitational waves, but also that they were caused by the coalescence of two black holes."

According to Dr. France Cordova, director of the National Science Foundation, this discovery "is more than a new generation of observations. It's seeing our universe with new eyes, in an entirely new way." Many scientists have compared it to being able to hear events that, until now, we could have only looked at, plus some we're not even able to see.

And our ears are getting better: LIGO is still improving its precision, and later this year the VIRGO observatory in Italy will join the program. In 2034 the European Space Agency's eLISA (Evolved Laser Interferometry Space Antenna) is scheduled to launch. It will consist of three orbiting probes a million kilometers apart from each other, carrying out experiments similar to LIGO's, but at much higher sensitivities.

As Gonzalez said, "Now that we know that gravitational waves are out there, we'll begin listening to the universe."

And you can listen to gravitational waves, too!