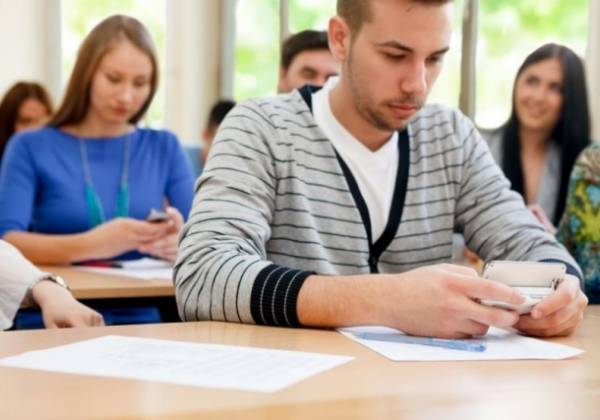 Imagine a classroom setting in a university, where students have their heads bent down - not taking notes as you imagine but looking into smartphones.

Smartphones have invaded our society and are prevalent in our everyday lives, especially among the younger generation.

Therefore, it's not surprising that they are universally found in many college settings.

But that begs the immediate question - Are smartphones beneficial to the educational process or are they a mere distraction?

The answer to this is published in a recent study by a team from a major research university in the United States.

How did the scientists conduct their experiments?

The scientists led a study between 2010-2011 that collected realistic data usage from smartphone activity, by recruiting 24 participants who where undergraduate students from a university.

Importantly, none of these students had previously used a smartphone nor had used other gadgets such as iPad and tablet computers, in other words were gadget neophytes.

As a part of the study, all students were provided with an iPhone and their cell phone usage was tracked using logging technology.

The researchers then conducted two surveys- The first one asked the students to rate their perception of how the smartphone will assist in their education. At the end of year one, the students answered the same questions but this time it was based on the actual value of their devices towards their education.

The questions in the survey ranged from: "My iPhone helped me get better grades", "My iPhone distracted me from school-related tasks" to that "I used my iPhone for learning outside the classroom".

Students rated these questions on a 5-point scale with an increasing scale of agreement.

Surprisingly, the results of this study revealed that the students perceived their iPhone more as a distraction than help and that it actually hampered their educational activities.

Additionally, students also reported changes in their habitual behaviors of having the need to constantly check their iPhones.

Therefore the students' survey refuted popular belief that technology has the power to enhance learning and performance in classrooms.

Obviously, handing a student an iPhone and left to his/her own devices does not seem adequate in advancing their educational performance.

However, as the authors point out that this study does not address the issue of structured (specific directed learning activities) use of smartphones in an educational environment.

"Some instances of structured learning are activities where the instructor has set out a planned use of the mobile device to accomplish a specific teaching goal. This can take the form of a guided exercise (e.g. "take out your phone and search for information on the Declaration of Independence"), which then leads to a discussion. If might also take the form of the use a specific app that demonstrates some principle (e.g. a physics app that shows conservation of momentum). It might even be as simple as the use of the device for in-class polling or anonymous question asking. In any of these cases the device is used at the direct direction of the instructor," says Dr. Philip Kortum, an author from Rice University, USA who is part of this study.

The findings from the study have larger implications in how technology needs to be integrated in a traditional classroom-centric educational system.

The seeming incompatibility between cell phone usage and college education, probably is not due to the technology in itself, but has more to do with the current education model which does not support an informal learning environment.

Since past studies have shown that when smartphone technology is used with a specific learning objective, they have significantly enhanced the learning experience.

Therefore what is the formula for success?

In future, education policy makers need to introduce organized and more fixed learning objectives that complement the use of smartphones and tablets in a conventional education setting.