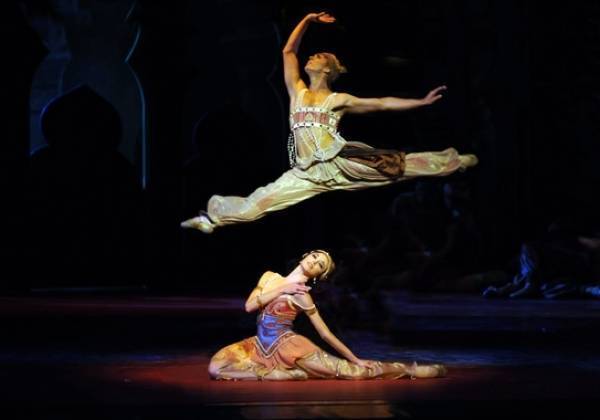 The Ballet ensemble of the Bayerische Staatsoper is performing The Ballet Russe. At the latest performance on 28 th october the Staatsoper was fully booked out. The audience loved the performance who brought them back to the early 19th century. At that time Serge Diaghilew gathered the best dancers of Russia and organized tours across Europe.

After their triumphant first season in Paris in 1909, the Ballets Russes quickly took the world by storm. At the same time as this unique group made its first appearances in Germany, catapulting its audiences into a state of frenzy, Germany's own dance scene was celebrating equally revolutionary changes.

The mysterious mixture of contemporaneity, opulence and exoticism has lost none of its fascination. In staging Les Ballets Russes, the Bavarian State Ballet celebrates the glory of dance, music and colour.

In Shéhérazade tragic of love, posession, desire, death and eroticism a story in beautiful costumes is danced, where individual dancers would show their talents. Les Biches, a humourous episode set in the Côte d'Azur at 1902s is exuding charm and lightness. The pink skirts of the ladies are swinging and the breath of happiness and charm is filling the stage when dancing as a group.

Once upon an ever after, is the last event after the second brake. With interesting light effects a picture is woven with moving and dancing bodies. The stage design is on a very high level supporting the fantasic dance performance.

The Ballet Russes will be performed again in April and June 2015.