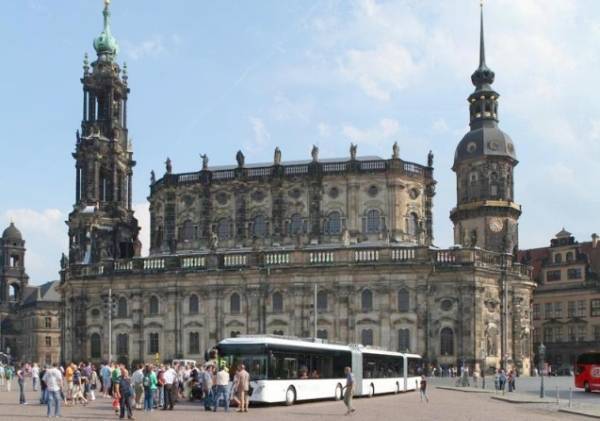 Wednesday, 22.08.2012 - Crowds of visitors, including politicians, researchers and journalists, were given the pleasure of viewing the Auto Tram Extra Grand as it was presented to the public for the first time at Theaterplatz in Dresden's historic city centre. The world's longest bus is a thirty meter long multi-unit vehicle which can take up to 256 passengers. The Fraunhofer Institute for Transportation and Infrastructure Systems (IVI),developed this particular vehicle concept, which till now was only used for research purposes. it is supposed to have combined the benefits of rail and road-bound transportation systems.

A special feature of the bus includes four guided axles which allows it to be steered and manoeuvred like a normal twelve meter bus. Being a cross between conventional city buses and trams, the vehicle is deemed perfectly suitable in Bus Rapid Transit systems, which are commonly used in South America and Asia, where rail-bound systems are too costly and space too scarce. This new technological advance could eventually become something major cities would want to consider in the future, with regards to a boosting greener transportation system.