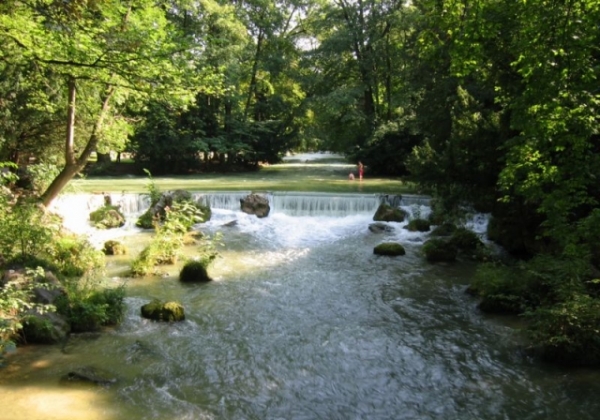 The surfing-wave in English Garden is a popular highlight with both tourists and locals. A reminder of Munich's relaxed approach to life, riding the wave has been illegal since 2010 and was only permitted because of a land exchange between the city of Munich and the state of Bavaria.

Riding the "standing wave" is recommended only for experienced surfers and considered dangerous. Swimming and bathing is prohibited in this area. The warning signs are there - but no one ensures that the prohibition is respected.

This is one of the reasons that fatal swimming accidents occur again and again - the last one on Monday 29th when a 15-year-old student drowned in the Eisbach. The teenage girl jumped into the water near the surfing wave with a friend and got into difficulties. By the time her friends noticed her absence and started looking for the girl and called rescuers, it was already too late. Her body was found later that day at the Tivoli power plant. Tragically the other teenagers didn't know their friend was a non-swimmer.

Experts know the dangers of the Eisbach, primarily its strong currents and cold temperatures. The often cheerful and clueless mood of young people spending their time at the river makes them even more unaware of its risks - and they ignore the warning signs.

How can accidents be avoided in the future? How can compliance of the bathing ban be enforced?

According to an article in the Sueddeutsche Zeitung from May 31st 2017, the responsible authorities have not considered the deployment of lifesavers. If it would be possible to cover the whole length of the most dangerous part and provide the needed staffing is probably questionable anyway. Instead they count on the good sense and responsibility of the users when it comes to complying with the regulations. Putting up signs that hint to the danger of life seems to be enough, according to some. Ignoring them is compared to car drivers not complying to traffic rules and therefore endangering themselves. Leaves one question: traffic rules are taught in driving school. What school teaches young adults good sense and responsibility in an environment like the English Garden in summer?

Additionally, what about the many tourists who would also accidentally put themselves in danger and who may not even speak German and consequently be unaware of the many fatalities this stretch of river has produced.

If you want to check out where bathing is officially allowed in the Isar, check the folllowing PDF:
http://www.muenchen.de/media/th/sommer/baden-isar.pdf