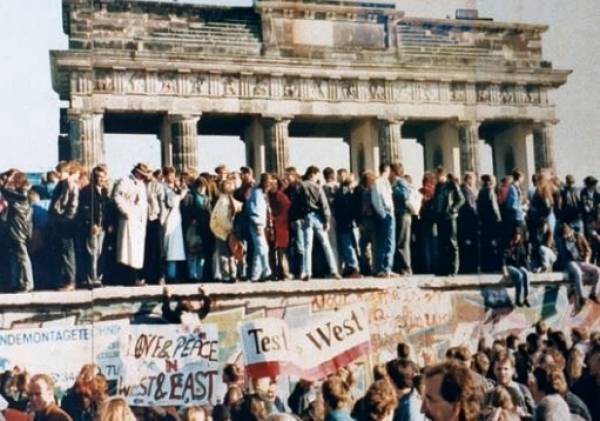 Berlin: Chancellor Angela Merkel hailed the courage of East Germans in helping bring down the Berlin Wall 25 years ago as celebrations raised the momentum building up to the historic occasion. However, former Soviet leader Mikhail Gorbachev struck an alarming note, pointing out that the world was closer to a new cold war. Merkel, herself daughter of a Lutheran pastor raised in East Germany, said the yearning for freedom brought down one of the most infamous symbols of the 20th century.

The Berlin Wall, built in 1961 to stop East Germans escaping to the West, came down on November 9, 1989 heralding the beginning of fall of Communism that led to break up of the Soviet Union two years later.

Thousands of Germans are flocking to celebrations in illuminated Berlin, where the wall stood for close to three decades. The spirit of celebrations has seeped into the whole nation and people walked along the 15-kilometre corridor of balloon lights built along the route where the wall stood. About 7,000 balloons have been placed on light poles 3.6 metre high, symbolising the height of the wall.

While leaders talked about the importance of the event, Berliners were enjoying cultural programmes marking the occasion.

German singer-songwriter and former GDR dissident Wolf Biermann and his wife Pamela Biermann also performed at a concert at the Ensemble.

Merkel will on Sunday open a major exhibition on Bernauer Strasse, once divided by the wall.
Gorbachev and former Polish president Lech Walesa are among leaders to be present at the Brandenburg Gate on Sunday. A grand spectacle will see the release of balloons, pyrotechnics and rock music.

Mukesh Sharma is an editor for The Munich Eye.

1.
Reuse of FFP2 masks for private use
2.
Pan India rollout of COVID-19 vaccination drive
3.
Mystery solved: The origins of flying dinosaurs
4.
What are FFP2 masks?
5.
FFP2 Masks - one use only and expensive
6.
FFP2 masks now compulsory on public transport
7.
Social media companies in the spotlight
8.
US democracy faces a bleak future
9.
Police Impersonators in Munich court
10.
Tighter lockdown for Germany