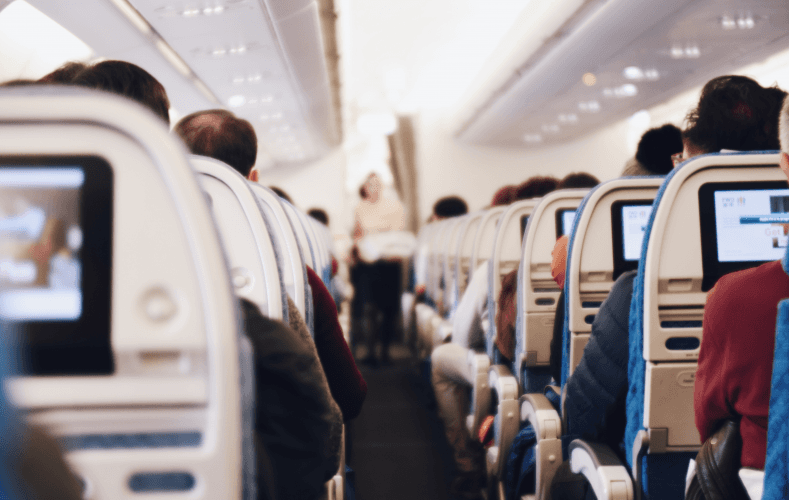 On the ground and at the airports

Wearing a protective mask is also mandatory when travelling to the airport by public transport. And the necessary distance must also be maintained when waiting before the flight, checking in baggage, going through security and when boarding and disembarking in the aircraft. In the terminal, floor markings and display stands will indicate that the necessary minimum distance of 1.5 metres must be maintained when waiting.

Some airports and airlines have strictly limited hand luggage by order of the federal police. Passengers are sometimes only allowed one piece of hand luggage per person. This is to keep waiting times at security checkpoints and boarding as short as possible to prevent the risk of infection. It therefore makes sense to enquire at the airline about their current hand baggage regulations.

Boarding should be as contactless as possible and should be carried out in small groups of people. It is also planned to reduce the on-board service for food and beverages and to provide more hygiene in the aircraft with sufficient disinfectant and gloves.

The aircraft will generally be handled directly at the terminal. Where this is not possible, more transfer buses will be used to ensure greater distance between passengers.

There is a proposal to measure the temperature of passengers before departure. But not everyone with a temperature suffers from Covid-19. And not everyone infected with the corona virus develops a fever. Frankfurt Airport has recently begun offering passengers and visitors a chargeable rapid test using a throat swab. And passengers can also have a chargeable PCR test performed at Munich Airport.

The European Aviation Safety Agency (EASA) and the European Centre for Disease Prevention and Control (ECDC) announced on 20 May 2020 in their guidelines on air travel that distance rules should be observed "as far as possible". The most plausible and simplest option would be to always leave a middle or neighbouring seat between passengers on the aircraft. This would not allow the required minimum distance of 1.5 metres to be maintained. However, a free middle seat could reduce the risk of infection by a factor of eight, according to calculations by aircraft researcher Dieter Scholz of the Hamburg University of Applied Sciences. But the airlines refuse to accept this due to economical reasons.

According to the aircraft manufacturer Airbus, the ventilation system in passenger planes is intended to ensure clean air and a low risk of infection.

Allegedly, the direction of the airflow has a positive effect on the viral load on board: air flows from top to bottom in the aircraft and presses released droplets onto the cabin floor. Under the seats on the cabin floor it is sucked out again. There are therefore no lateral air currents. The air in the aircraft, a mixture of outside air and recycled cabin air, is passed through filters in the air conditioning system. The problem with filters: they only retain bacteria, but not reliably viruses. A corona virus is 60 to 140 nanometres in size. However, the filters used in aircraft generally only retain particles down to 0.3 micrometers in size, which is equivalent to 300 nanometers.

There is a study commissioned by IATA (International Air Transport Association) on the risk of contracting SARS-Cov-2 on board an aircraft. When asked by 18 airlines in the months January to March 2020, the study published so far has not found a single confirmed case of passengers infecting each other. There are three suspected cases where passengers may have contracted the disease from crew members and four cases where the disease may have been transmitted between pilots, possibly during a stopover on the ground. Further data analyses are planned.